How to Avoid These 3 Common Meeting Pitfalls

You think you attend a lot of meetings?

At the Sketch Effect, we get paid to attend meetings!

Since our founding in 2013, we have attended hundreds of client events, seminars, conferences, summits, workshops and other corporate gatherings to provide our Live Sketching and Graphic Recording services.

Although there are many factors that can cause a meeting to go off the rails, we’ve identified three common (and avoidable) pitfalls that trip up the most well-intentioned of meetings.

So, without further ado: 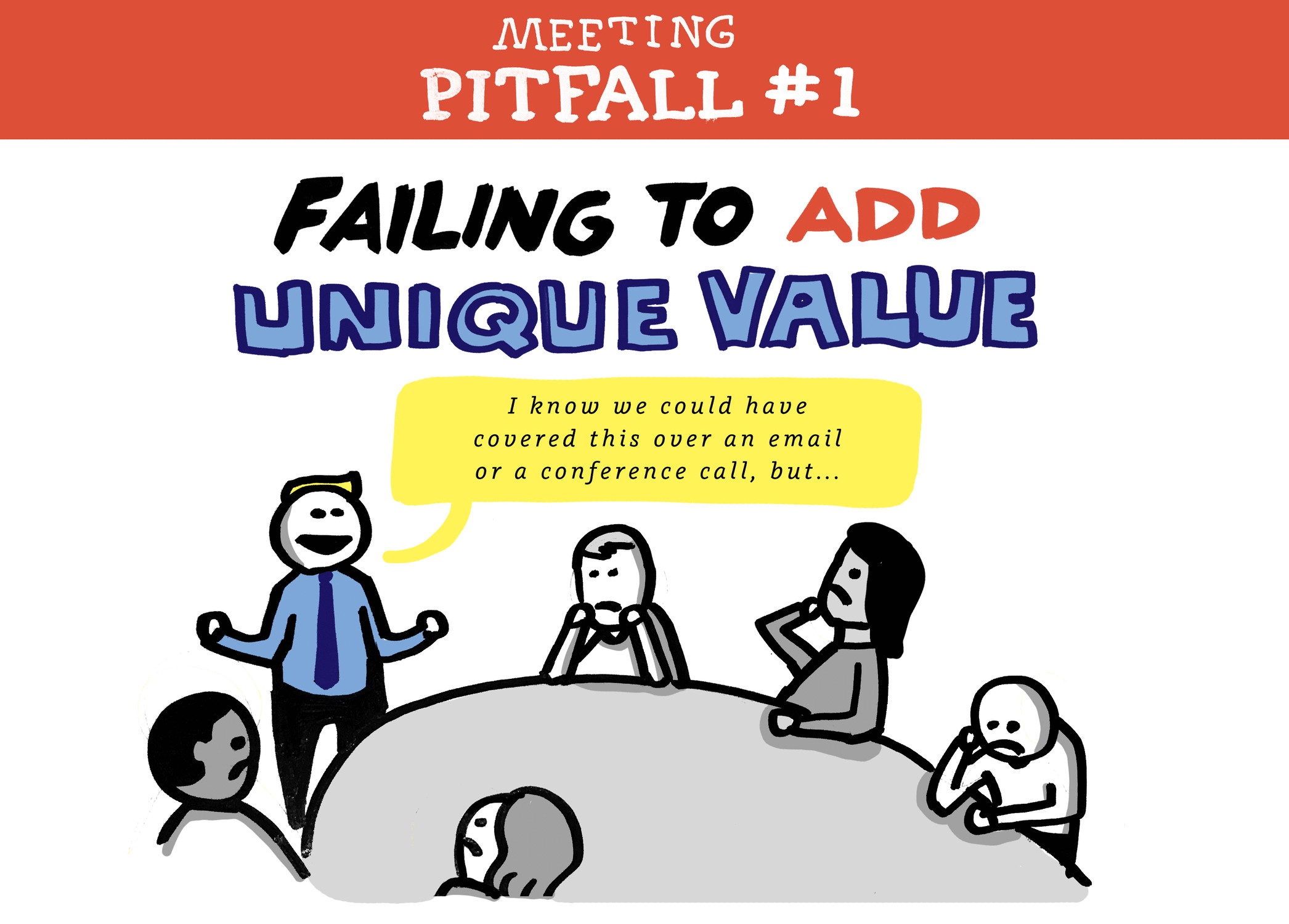 The truth is, we all hold meetings for selfish reasons. If you host a meeting, it is because you want or need something from those around the table. And that is totally fine…this is one of many social contracts we all abide by in the business world.

However, the most successful meetings are others-oriented…they give something back to the attendees. In other words, these gatherings add value to those in the room.

To avoid this pitfall, simply ask: “When my attendees leave this room, how will their lives be better than when they showed up?”

The answer to this question will look different for different groups. It might be something grand, like extra effort and energy channeled towards solving their problems (not just yours). It might be a simple, tangible gift that you give to them. Or it might be some unique or creative experience you incorporate into the meeting.

When it comes to adding value, the sky is the limit.

Make sure your meetings are worth attending…and definitely don’t ask people to meet when a phone call or email would suffice.

Pitfall #2 – Failing to List Clear Next Steps for Your Attendees 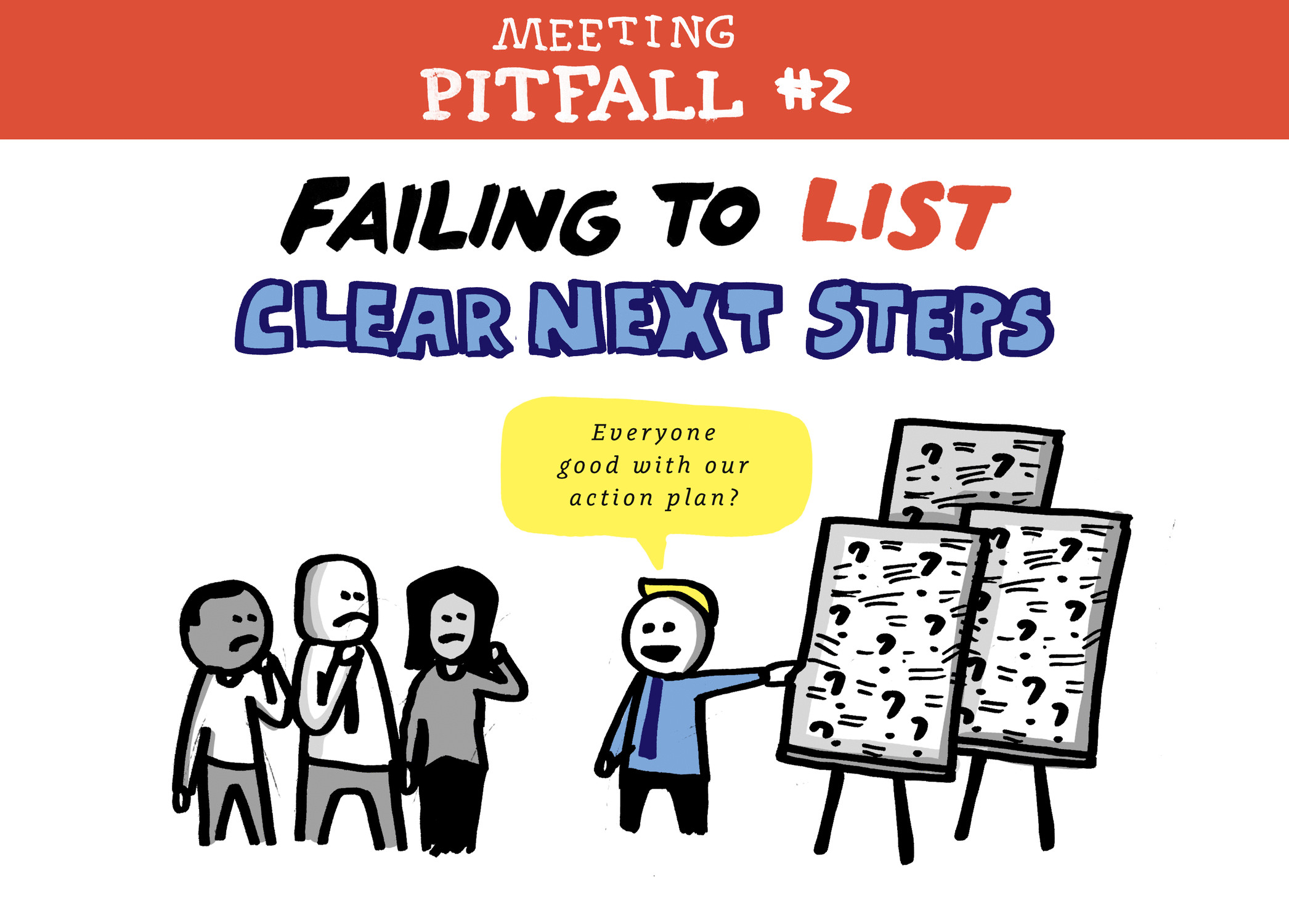 A lot of meetings have incredible intentions. Intentions are good…but they are definitely not enough. A meeting is only as good as the results it generates.

I can’t tell you how many gatherings we’ve attended where the group spends hours conducting incredible discussions, hashing out big ideas, and stating grand intentions. And then the meeting ends…and nothing happens.

To avoid this second pitfall, assume a “Next Steps Mindset.” Be present in the moment, of course, but always consider what your meeting means for the future.

A simple way to do this is to reserve a block of time at the end of your meeting to specifically outline next steps and delegate any responsibilities. One way to remember this is to pre-make (on a whiteboard or flip chart) a large empty list titled “Next Steps” with blank numbers and display it in the room. The attendees will see it throughout the day, and filling in those blank spaces will be a satisfying way to wrap up your time as a group.

Pitfall #3 – Failing to Capture the Output in a Relevant Way 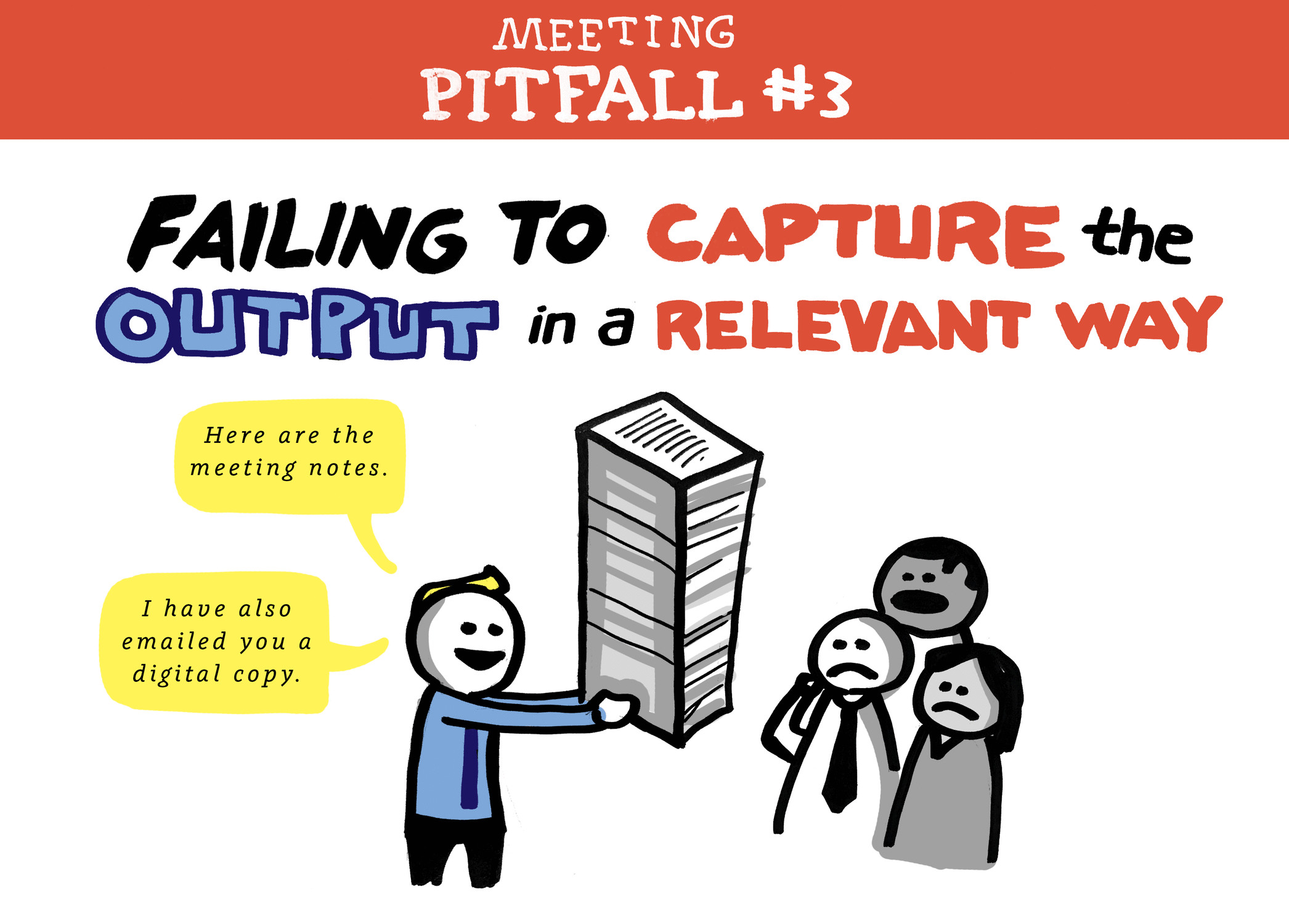 Studies show that the retention rate of information from a meeting hovers around 10% for a few days…and then decreases even more afterward. That is incredibly low! And it’s especially painful for meetings that generate rich discussions and incredible ideas.

Unfortunately, meeting minutes are not enough. Let’s get real: although detailed notes are a valuable resource, the average attendee will never look at them. The same goes for the ubiquitous follow-up email “recap”. Don’t let the valuable output from your meeting languish in email purgatory!

To avoid pitfall #3, simply capture the output in an effective and memorable way.

The simplest approach is to capture the big ideas on a whiteboard, take a picture of it, and include that in your email recap (folks are much more inclined to view a picture than they are to read a lengthy recap). A higher-end approach would be to hire a video crew to film the meeting and generate an edited takeaway video for attendees to watch later.

Another compelling approach is to hire a Visual Communications team, like the Sketch Effect, to visually capture your meeting content in the room in real-time. It’s a simple, affordable, and effective way to ensure the incredible output from a meeting isn’t lost forever but is maximized for the highest value.

In summary, if you want to be a professional in the 21st century, you have to host and attend meetings. It’s a fact of life in the world of business. However, if you avoid these three common pitfalls, these meetings don’t have to be a waste of time.

So for your next meeting, make sure you’re adding unique value, take time to list the next steps, and capture the output in an effective, memorable way.

You have Successfully Subscribed!